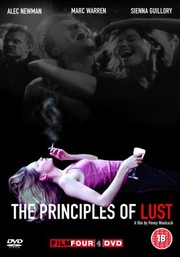 The Principles of Lust

The Principles of Lust Reviews

OutRajious C
½ June 20, 2012
Peppered with scenes of debauchery in the north, remarkably similar to Get Carter, set in a mansion in both films. Northern hazards?
Also, people in the north seem to be very bad at driving.
Not an entirely unhappy ending, bit of a surprise, and it's better for that.
A stinging truth about an element in male relationships, how many times is it the whispered suggestions of a mate that ruins your life. Frequently.

Paul D
½ April 5, 2011
Offbeat story of finding meaning in life, but despite some powerful imagery, it's distinctly average.

George P
½ September 12, 2009
A very strange film, showing that drugs and sex ARE NO LAUGHING MATTER. Like I say odd

Zoe S
February 4, 2009
A first did not know what i was watching but it turned out to be a really good film... a bit confusing and brutal at bits but a great film altogether...

Paisley M
January 19, 2009
The only reason I give it such a high review is because Julian Barratt is WONDERFUL. Otherwise, this was awful and pointless.

Fergus S
December 23, 2008
One of those movies that you immediately forget about and then the memories come flooding back after a few seconds.

Tyler B
½ September 19, 2008
I love this movie, Sienna Guillory is so hot in this flick, and Marc Warren is completely fucking psycho. It is worth finding, 'cause it is a really hard to find movie in the states.

Ji S
June 1, 2008
watched it last night... a bit stressy! Kind of in your face British hedonism but ok... if you like that kind of thing. It does say something about how men here think about relationships!

Robyn H
December 22, 2007
The final scenes with Marc Warren's character seem over the top but the rest of the film is excellent

Kirstin G
½ November 18, 2007
Love this movie... just as brutal third time round as it was the first!! Marc Warren plays a complete psycho.. one of those in your face guys that you daren't cross

Steve G
November 5, 2007
An incredibly grown up, well made, perfectly cast movie...British film at it's best.

Julie F
November 2, 2007
my partner wrote this film so its a bit to close for comfort, i'm glad people like it though

August 3, 2007
I'm really not a Marc warren fan, but Rosskernow's review has made me add this to my 'want to see it' list

Rod S
July 24, 2007
Crippled by his writer's block, Paul enters into a new, exciting relationship with risk-taking Billy and super-sexy Juliette. As it becomes increasingly tangled, however, he must choose one of them over the other. Sexy guys Alec Newman and Marc Warren. Oral Sex / Female Nudity / Blow Job / Gay Interest what more could you want. So who gets who and why???

Corey N
July 23, 2007
typical British film about how life can be bad for you if you follow 'the principles of lust'. the story is about a writer who meets a photographer, who is obviously a bit of a psycho, because he organises fights involving 11 year olds, takes drugs, and has lots of dirty sex. when the writer meets a girl, he soon ends up moving in with her and begins to realise his life could be in the doldrums....

part 'fight club' part 'trainspotting', the movie essentially tells us not to move so fast in life, because thats where regrets can be made, as soon as Paul meets billy, he is dragged into a world of sordid sex, drugs and a really depressing livelihood. on the other hand when he meets Juliette, he instantly falls for her and moves in with her, because she makes him an offer he really cannot refuse. as predictable as lust is, they soon find themselves realising they have nothing in common, and start not to trust.

the problem is, if the characters were likable, then this would have been a great movie, but not one character can be shown empathy, so we really do not care what the outcome is. the editing makes the film a little cold, as does the lighting.

the narration of the story flows smoothly and the two male leads do well in their roles (it's a shame that Warren feels a little typecast in his role).

not as bad as some of the reviewers on this sit make it out to be, but with films like this trying to be too controversial, it's no wonder why film four became defunct.
Page 1 of 1