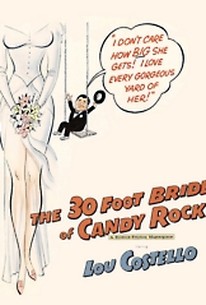 Lou Costello made his only film appearance without Bud Abbott in 30 Foot Bride of Candy Rock. Lou plays a bumbling junk dealer who fancies himself a great inventor. One of his creations transforms his girlfriend Dorothy Provine into a towering giant! The subsequent shenanigans involve Lou, the humongous Ms. Provine, her bombastic uncle Gale Gordon, and the entire US Army. Before Dorothy can be returned to normal size again, Lou's invention transmogrifies into a time machine and rocketship. 30 Foot Bride of Candy Rock tries to be a satire of Attack of the Fifty Foot Woman, a slapstick comedy, a marital farce, and a sci-fi epic all in one, but it never really jells. Ill with rheumatic fever during shooting, Costello seems more solemn and reserved than usual; still, whenever the material is up to par, he rises to the occasion, offering some choice comic moments in the climactic chase sequence. The special effects are a bit grainy, but convincing within their medium-budget limits. Our favorite bit: the "barking Sputnik", a cute comment on the US-Russian space race. By the time 30-Foot Bride of Candy Rock hit the theaters, Lou Costello was dead, precluding any followups (if, indeed, any were planned). ~ Hal Erickson, Rovi

Will Wright
as Pentagon General

Ruth Perrott
as Aunt May

Jack Straw
as Pilot
View All

Critic Reviews for The 30 Foot Bride of Candy Rock

There are no critic reviews yet for The 30 Foot Bride of Candy Rock. Keep checking Rotten Tomatoes for updates!

There are no featured reviews for The 30 Foot Bride of Candy Rock at this time.