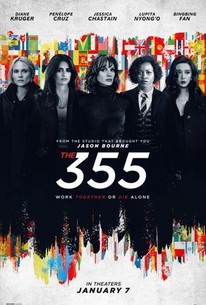 Critics Consensus: It has a stellar cast and it's conceptually progressive, but The 355 squanders it all on a forgettable story, unremarkably told.

Critics Consensus: It has a stellar cast and it's conceptually progressive, but The 355 squanders it all on a forgettable story, unremarkably told.

Critic Consensus: It has a stellar cast and it's conceptually progressive, but The 355 squanders it all on a forgettable story, unremarkably told.

When a top-secret weapon falls into mercenary hands, wild card CIA agent Mason "Mace" Brown (Oscar (R)-nominated actress Jessica Chastain) will need to join forces with rival badass German agent Marie (Diane Kruger, In the Fade), former MI6 ally and cutting-edge computer specialist Khadijah (Oscar (R) winner Lupita Nyong'o), and skilled Colombian psychologist Graciela (Oscar (R) winner Penélope Cruz) on a lethal, breakneck mission to retrieve it, while also staying one-step ahead of a mysterious woman, Lin Mi Sheng (Bingbing Fan, X-Men: Days of Future Past), who is tracking their every move. As the action rockets around the globe from the cafes of Paris to the markets of Morocco to the opulent auction houses of Shanghai, the quartet of women will forge a tenuous loyalty that could protect the world--or get them killed.

Critic Reviews for The 355

This simplistic approach, which forces an evil/ethical binary, paired with a ham-fisted dialogue, flattens the film and makes the lulls between fight scenes feel more like retribution than respite.

If you've ever seen a mediocre action movie with a surprisingly stacked cast, then you've basically seen this.

There's nothing here that Angelina Jolie and Scarlett Johansson haven't done already but Kinberg and his nimble cast achieve such momentum that you'll probably shelve your reservations until it's all over.

Doggedly mediocre actioner The 355 is the cinematic equivalent of gathering together Formula 1's finest drivers and tossing them the keys to a Yugo.

This is a title that screams, "Watch me at home!"

Undone by a wholehearted embrace of all of the worst action-adventure filmmaking techniques of the past two decades.

Some of the action sequences were cringy.

Charlie's Angels on steroids -- female power all the way.

Even with all the boxes checked, The 355 is not the full-on all-female actioner it hopes to be. There is a lot of talent here, maybe too much for a lesser film like this.

[A] same-old-same-old action antique, a movie whose every beat rings familiar. We could have gotten something new with this one. Instead, we've seen it all before.

he main problem, besides the awful dialogue, is with the movie's austere tone. It needed to be much lighter.

There are no featured reviews for The 355 at this time.