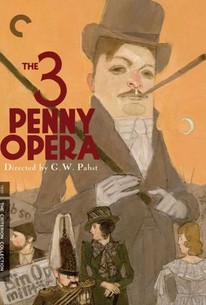 Filmmaker G.W. Pabst's adaptation of Bertoldt Brecht and Kurt Weill's Threepenny Opera (Die Dreisgoschenoper) is every bit as good as the stage original, and sometimes even better. Filmed in both German and French versions with different casts (a planned English-language version was abandoned), Threepenny is most readily available today in its German incarnation. Rudolf Forster stars as robber captain MacHeath -- aka Mackie Messer, or Mack the Knife -- who falls in love with Polly (Carola Neher), daughter of beggar king Peachum (Fritz Rasp). Despising MacHeath, Peachum plots the thief's downfall with his best friend, corrupt police official Tiger Brown (Reinhold Schunzel). The satirical "happy ending" of the original -- MacHeath, en route to the gallows, suddenly and without motivation promoted to knighthood! -- is altered somewhat by Pabst and his scenarists to accommodate a swipe against Depression-era bankers. Lotte Lenya, Weill's wife, brilliantly repeats her stage role as Pirate Jenny. Stylistically, Threepenny Opera is a Georg Grosz drawing come to life; despite its 1890s London setting, the film's calculatedly tawdry veneer is clearly meant to represent the wide-open Berlin of the 1930s. For the record: the French version of Threepenny Opera starred Albert Prejean as MacHeath. ~ Hal Erickson, Rovi

As an antiquity, its sardonic story has some merit and its technical flaws are excusable, altho by modem standards the acting is atrocious, the lighting poor, the sound track off key and there are several spots in which the screen simply goes blank.

It's a lavish production and it shows in every frame, yet [director G.W.] Pabst is also true to Brecht's political commentary and social satire.

A milestone of cinema that is historically important but distractingly abstract and exaggerated.

G.W. Pabst's version of "The Threepenny Opera" excited me in multiple ways. It's a fine example of an early musical. There's the intrigue of seeing this now-classic work filmed when it was still a fresh creation (the play debuted less than three years earlier). We also see the legendary Lotte Lenya in her prime, in what may be her definitive role. More importantly, this is an exceptionally well-made film for its time. The sets and costumes are wonderful, with the perfect mix of pretense and seediness, and the makeup is more natural than is often found in this era. But it's the camerawork which is most impressive -- there are all sorts of tracking shots and pivots which must have seemed quite daring and vanguard in 1931. My expectations weren't particularly high for this film, and they were easily surpassed. The biggest minus is that the ending -- changed from the original book -- is somewhat weak and unsatisfying.