The 4 Horsemen of the Apocalypse1962 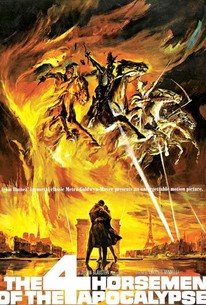 The 4 Horsemen of the Apocalypse Photos

There's a rumor that the MGM executive who thought that Glenn Ford could fill Rudolph Valentino's shoes in the 1962 remake of Valentino's Four Horsemen of the Apocalypse would have been arrested had it been sufficiently proven that he was competent to stand trial. The World War I setting of the original Blasco-Ibanez novel has been updated to World War II, but the basic plot remains the same. A well-to-do Argentinian family, rent asunder by the death of patriarch Lee J. Cobb, scatters to different European countries in the late 1930s. Before expiring, Cobb had warned his nephew Carl Boehm that the latter's allegiance to the Nazis would bring down the wrath of the titular Four Horsemen: War, Conquest, Famine and Death. Ford, Cobb's grandson, has promised to honor his grandfather's memory by thwarting the plans of Boehm. At the cost of his own life, Ford leads allied bombers to Boehm's Normandy headquarters. As unsuited as Glenn Ford was for his role, co-star Ingrid Thulin was even worse: her Swedish accent proved so impenetrable that MGM was obliged to have Angela Lansbury dub Ms. Thulin's voice. A major misfire for director Vincente Minnelli, The Four Horseman of the Apocalypse was an expensive flop, forcing MGM to hope and pray that their upcoming epic How the West Was Won would save the studio's hindquarters (it did). ~ Hal Erickson, Rovi

Critic Reviews for The 4 Horsemen of the Apocalypse

Inferior to the silent Valentino version, Minnelli's epic is stale and verbose, failing to ground its protgaonists and their opposing views in any recognizable or engaging political context.

Audience Reviews for The 4 Horsemen of the Apocalypse

Overlong, confused remake. The real handicap is the ridiculous casting of Glenn Ford as the Argentinian lead that Rudolph Valentino played in the original. Thulin's dialogue was dubbed by Angela Lansbury in its entirety leading to even more of a disconnect.

Minnelli's only entry in the war movie genre gets off to a cracking start. A heavily made up Cobb, the head of a rich Franco-German expat family in Argentina, suffers a fatal stroke upon learning his Grandson Boehm has joined the Nazis. A raging storm hits and the ghostly figures of the mythical title quartet appear in the heavens above. After this opening, of a melodramatic nature even Oliver Stone would consider over the top, the movie slows down and develops into a second rate war drama. The forty-six year old all American Ford is terribly miscast as a young Argentine spin on the Bel Ami archetype. I've never seen the appeal of Ford, to me he suffers from a serious lack of charisma. I just can't buy him as the charming lover type. Minnelli wanted Alain Delon for the role but unfortunately had Ford forced upon him by the studio. Coupled with an equally bland actress, Thulin (who was dubbed by Angela Lansbury due to her impenetrable Swedish accent), it's difficult to engage in their plight. Neither are particularly likable, basically just a pair of rich brats, whereas Thulin's husband, Henreid is portrayed as the noble soldier. If your leading characters are engaging in morally dubious activities you really need to cast charismatic performers to get the audience on their side. Visually it's splendid, great widescreen compositions and the usual Minnelli flair for colour. This is a remake of a Rudolph Valentino starring silent film and Minnelli borrows some techniques that were long out of favor by 1962. The surreal imagery of the horsemen was all too common in the silent era but is unusually striking in a sixties Hollywood movie. A major flop for MGM, this would be the last time Minnelli was given such a broad canvas. It's said his confidence was shattered by the experience and so he disappeared from the limelight immediately after, working only sporadically and with little acclaim.

The 4 Horsemen of the Apocalypse Quotes