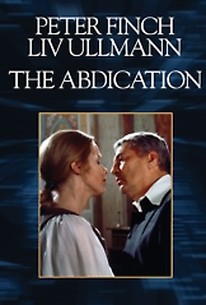 In this historical drama based on actual events, Sweden's Queen Christina (Liv Ullmann) decides in 1654 to give up her throne in order to embrace Catholicism. However, as she studies the faith, she falls in love with Cardinal Azzolino (Peter Finch), a cleric being considered for the papacy. Greta Garbo previously played the same abdicating monarch in the film Queen Christina. Michael Dunn, who plays the dwarf in The Abdication, died during production, and several of his scenes had to be shot with another actor doubling for him. ~ Mark Deming, Rovi

Michael Dunn (I)
as The Dwarf

Critic Reviews for The Abdication

There are no critic reviews yet for The Abdication. Keep checking Rotten Tomatoes for updates!

There are no featured reviews for The Abdication at this time.