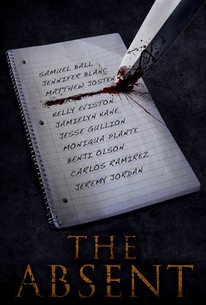 Troubled high school teacher Vincent realizes that his affair with a student may be the least of his worries when his psychotic brother gets paroled from prison and returns to their hometown wrecking bloody havoc. Vincent's career is on the line. A respected teacher who's been sleeping with pretty student Kate, he's weighing his career against his heart's desire when his brother Oscar is released from prison after serving 25 years for the murder of their parents. When Oscar begins to target Kate's friends, the local sheriff casts his suspicions on Vincent. Now, in order to clear his name and stop the killing, Vincent must face the one person who knows all of his fears and weaknesses - his own diabolical sibling.

Critic Reviews for The Absent

There are no critic reviews yet for The Absent. Keep checking Rotten Tomatoes for updates!

Audience Reviews for The Absent

Judging by the movies description, I thought it was gonna be awesome but I noticed as it went on, I started counting down the minutes till it was over.I would've rather had seen the movie as it was described then what I actually saw.I wish I would've been absent for The Absent.I gave up on this movie before I even figured out what was going on.Zzzzz.