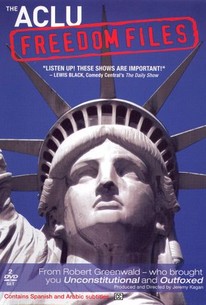 Get the first ten episodes of the hit Court TV series in one feature-packed release as The A.C.L.U. Freedom Files brings the cases that threaten the civil liberties of Americans from all walks of life to the screen for all to see. Interviews, documentary footage, dramatizations, and animation combine to highlight shocking cases in which the civil liberties of everyday Americans were threatened, and shows just what actions they took to fight back against the system. Produced by Emmy winner Jeremy Kagan and featuring special guest appearances by Margaret Cho, Noah Wyle, Harry Shearer, Lewis Black, and more, this release also offers additional interviews with executive producer Robert Greenwald, ACLU executive director Anthony Romero, and features additional material from the many comedians involved with the politically charged program.

There are no critic reviews yet for The A.C.L.U. Freedom Files. Keep checking Rotten Tomatoes for updates!

There are no featured reviews for The A.C.L.U. Freedom Files at this time.