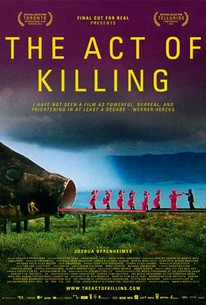 Critics Consensus: Raw, terrifying, and painfully difficult to watch, The Act of Killing offers a haunting testament to the edifying, confrontational power of documentary cinema.

Critics Consensus: Raw, terrifying, and painfully difficult to watch, The Act of Killing offers a haunting testament to the edifying, confrontational power of documentary cinema.

Critic Consensus: Raw, terrifying, and painfully difficult to watch, The Act of Killing offers a haunting testament to the edifying, confrontational power of documentary cinema.

The Act Of Killing Photos

Anwar Congo and his friends have been dancing their way through musical numbers, twisting arms in film noir gangster scenes, and galloping across prairies as yodelling cowboys. Their foray into filmmaking is being celebrated in the media and debated on television, even though Anwar Congo and his friends are mass murderers. Medan, Indonesia. When the government of Indonesia was overthrown by the military in 1965, Anwar and his friends were promoted from small-time gangsters who sold movie theatre tickets on the black market to death squad leaders. They helped the army kill more than one million alleged communists, ethnic Chinese, and intellectuals in less than a year. As the executioner for the most notorious death squad in his city, Anwar himself killed hundreds of people with his own hands. (c) Official Site

News & Interviews for The Act Of Killing

30 Incredible 2010s Directing Debuts That Left Us Begging For More
Interview: Oscar-nominated Act of Killing Director on the Humanity of Evil
RT on DVD & Blu-Ray: Archer, Closed Circuit, and More

View All The Act Of Killing News

Critic Reviews for The Act Of Killing

The Act of Killing is the only 100% original work of cinema to come out this year.

If Oppenheimer's aim is to question and investigate what life the past has in the present, he has succeeded in a staggeringly original way.

[An] innovative piece of filmmaking so breathtakingly daring and powerful, it replaces your oxygen with awe.

Once you grasp just what is being enacted on the screen, The Act of Killing becomes something like a candy-colored moral migraine. An existential nausea is inevitable.

The shock of the final scene must be left unspoken; suffice to say its impact exceeds even the nightmarish queasiness which this brilliant and horrible film has striven to contain.

The emotionally manipulative use of some of the material raises all kinds of questions about veracity.

The results are astonishing, terrifying and eventually profound, as the men start to confront their own pasts.

The bloodbath and coup in Indonesia were the outcome of the drive by US imperialism to gain control of the natural and strategic resources of the archipelago, known as the "Jewel of Asia."

The Act of Killing might be the most powerful and cathartic documentary I've ever seen.

Demonstrates with chilling authenticity that nobody thinks they're the bad guys.

Everything that occurs in The Act of Killing is outrageous and offensive and inhumane.

There are few films that have legitimately left a chill down my spine. The Act of Killing is one of them.

Audience Reviews for The Act Of Killing

A shocking and terrifying film that sets out to investigate the twisted minds and souls of death squad leaders in Indonesia, growing to become a disturbing panorama of a society and offering a unique sort of moral confrontation which could only be possible through Cinema.

Documentarians ask the leaders of Indonesian death squads to reenact their crimes. There are some incredibly absurd moments in the reenactments of various fifty-year-old murders, including one of the henchmen dressing up in drag for no discernible reason. But the heart of this documentary is compelling the film's primary subject to face his own flagging, ignored conscience. It takes a while, and there are blithe pronouncements about death and killing that make one's stomach turn, but the film eventually pays off. Overall, the gimmick of the film, the reenactments, seems a little weird, but the premise is still compelling.

These may be the most absurd two hours of film I'll ever see. Though this documentary follows many mass murderers as they set out to make a movie boasting about their genocidal slaughters, it focuses in on Anwar Congo. Among these killers, Anwar made the biggest name for himself with his apathy and creativity. At the beginning of the documentary, he upholds his image as an untouchable, joyful and easy-going celebrity "free man." With a smile and tools in hand, he casually recalls and demonstrates his methods. Over the course of these two hours however, his internal transformation is the only thing that will make any sense. The footage here is astounding, and raises an overwhelming amount of questions about Indonesia's history and it's current state, as well as America and the UK's own culpability.

While extremely painful to watch, "The Act of Killing" displays a brutally honest story about the life of Anwar Congo, a gangster who helped the mob kill millions of communists. This film displays he himself re-enacting scenes of actual events that he remembers from the past. He puts on display for the world to see, the horrific ways of killing people and sometimes you feel like throwing up while you are watching. Anwar begins to realize that even though what he did back then was legal, he himself, after personally experiencing the effects, has a complete turn around with his feelings. This film is something that needs to be shown to the world, but only to those who are mature enough to view. I will never say I love this film, based on it's subject matter, but it is a brilliant documentary that almost feels like a shoe-in for the Oscars. "The Act of Killing" is superb in it's messages.

The Act Of Killing Quotes