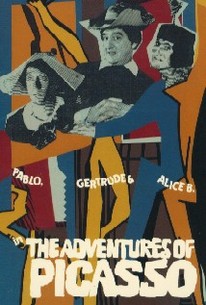 Gosta Eckman impersonates the famed Spanish artist Pablo Picasso in this gloriously irreverent Swedish "biography". The Picasso seen herein is a bumbling, vulgar clown, forever falling down, bumping into walls and spewing forth inappropriate profanities. The high (or low) point comes when an equally ridiculously caricatured Dr. Albert Schweitzer operates on a dying Picasso (a cute trick, since Picasso outlived Schweitzer by several years). You know what to expect when you see the aggressively masculine British comic actors Bernard Cribbins and Wilfred Bramball as, respectively, avant-garde poetess Gertrude Stein and her longtime companion Alice B. Toklas. Adventures of Picasso has its fans, though most don't immediately own up to liking the film.

Wilfrid Brambell
as Alice B. Toklas

Per Oscarsson
as Apollinaire

Magnus Haerenstam
as Hitler
View All

Critic Reviews for The Adventures of Picasso

The Adventures of Picasso...And A thousand Loving Lies is a nimble-footed flight of fancy.

There are no featured reviews for The Adventures of Picasso at this time.

The Adventures of Picasso Quotes