The Affairs of Cellini1934 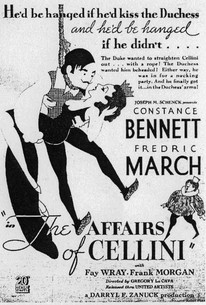 The Affairs of Cellini Photos

Alessandro, the Duke of Florence (Morgan) is about to condemn Benvenuto Cellini (March) to death, but the duchess (Bennett) persuades him to spare the goldsmith/adventurer, who's often in trouble. Alessandro reconsiders and orders him to be hanged, but the wily Cellini talks his way out of it and introduces the duke to his beautiful model Angela (Wray). The duchess tries to trick Cellini into romancing her, but he escapes from the palace with Angela, now fond of Alessandro. Later, the goldsmith sneaks back into the palace and romances the duchess, but he's caught and sentenced to be tortured. Again the duchess arranges his release, but when Alessandro falsely tells her Angela is Cellini's fiancee, the duchess decides to poison the goldsmith. He switches glasses with the scheming Ottaviano (Calhern), then feigns death until the duchess confesses her love and Ottaviano drops dead. Alessandro is furious until Angela is sweet to him, so he and she take the summer palace, and the duchess and Cellini depart for the winter palace.

Constance Bennett
as Duchess of Florence

Jack Rutherford
as Captain of Guards

Critic Reviews for The Affairs of Cellini

The picture is really a sort of comic opera, all surprise entrances and sudden exits, flights of not too serious emotion and violent but amusing deaths.

It is so funny that you will probably have to see it twice, in order to catch the lines which were drowned out by your own raucous laughter the first time.

Gregory LaCava was more adept at directing melodramas and screwball comedies than historical epics, such as this one.

Audience Reviews for The Affairs of Cellini

I didn't have a great copy of this film to watch which always makes me somewhat distracted but my impression of the film is that this had promise without the impact that all those concerned would have liked. There are some truly funny moments but ultimately, we don't feel much attachment to the characters.

Although this movie is extremely silly, there are many laughs throughout.

Silly nonsense that has no true period feel for the 16th century but is played for a light tone. It's pleasant enough in that highly polished early 30's studio style. Frank Morgan plays his usual charmingly befuddled dunderhead.

The Affairs of Cellini Quotes