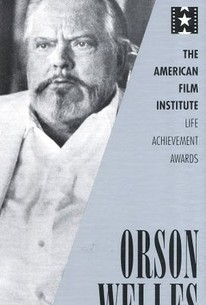 The American Film Institute Life Achievement Awards: Orson Welles gathers close to a dozen stars, including Charlton Heston, Frank Sinatra, Johnny Carson, Ingrid Bergman, Robert Wagner, Natalie Wood, Janet Leigh, Joseph Cotten and Dennis Weaver, plus some other luminaries in the audience, to give the AFI's most coveted award to the maverick director. The awards dinner, the third in AFI's continuing series, features clips from the breakfast sequence of Citizen Kane, the shoebox sequence from Touch of Evil, the funhouse sequence from The Lady from Shanghai, the Shrewsbury battle sequence from Chimes at Midnight -- in other words, it provides a pretty good summation of Welles' career and impact upon movies. The fact that Welles biographer Peter Bogdanovich was among the consultants probably has a great deal to do with the show's verisimilitude. Some speakers stumble: Edgar Bergen and Charlie McCarthy massacre the story of Welles famous "War of the Worlds" radio broadcast, and Sinatra reads his speeches and a special song written about Welles for the occasion from a script in his hand. Yet what really distinguishes the show is its inclusion of some altogether rare footage from The Other Side of the Wind, Welles' never-completed, mythic film. The two lengthy sequences, and Welles' really funny mock-pleading for "finishing money" during his thoughtful yet defiant acceptance speech, provide fascinating glimpses into the Welles persona and are a powerful reminder of Welles' considerable skills as a showman.

There are no critic reviews yet for The AFI Lifetime Achievement Awards: Orson Welles. Keep checking Rotten Tomatoes for updates!

There are no featured reviews for The AFI Lifetime Achievement Awards: Orson Welles at this time.