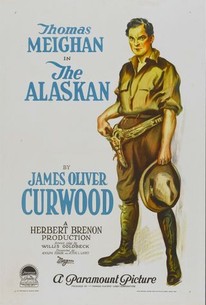 Thomas Meighan single-handedly saves Alaska in this James Oliver Curwood tale of the Northwest, which was shot on-location in British Columbia and Alberta. The Holt family wants to stop big business from destroying Alaska's pristine beauty. The elder Holt is killed, and his son, Alan (Meighan), is left to continue the fight. He heads for Washington to stop John Graham (Alphonse Ethier) from carrying on his dirty dealings in Alaska, but the government won't step in to help. On the ship returning home, he meets Mary Standish (Estelle Taylor), who is being watched over by Rossland, Graham's lieutenant (John St. Polis). Just before the ship reaches the port, Mary leaps overboard. Alan searches frantically for her and finds her at the home of one of his men. She reveals that she is married to Graham, who abuses her mercilessly. Graham insists that Alan give up Mary, and when he refuses, goes after them. Graham and Alan come to blows, and one of Graham's henchmen, in an attempt to shoot Alan, kills his boss instead. Because of Graham's death, Mary is conveniently freed up to marry Alan -- and Alaska is saved. Anna May Wong, who would shortly make her mark in Douglas Fairbanks Sr.'s Thief of Baghdad, has a bit part as Keok, an Eskimo girl. ~ Janiss Garza, Rovi

Anna May Wong
as Keok

Charles Ogle
as The Luwper
View All

Critic Reviews for The Alaskan

Suspense has little place in the various doings of the characters, as one can predict far ahead that hero and heroine are not going to perish for their courage and goodness. The improbable surprises sprung upon one do not help this picture.

The cast is great, the photography beautiful, direction corking, and above all, the star marks his return by giving a great performance.

There are several thrilling parts in the play, which was filmed for the most part in northern America, where the mountains for the greater part of the year are shrouded in mist.

A direct and concisely-told story of outdoor life, with not too much emphasis on the inevitable hairbreadth escapes of the hero, and the desperate struggle on the edge of a cliff.

The picture Is full of crudities. acting of the senior play at high school variety, and highly improbable situations.

Even the name and presence of Tom Meighan cannot save The Alaskan from being stigmatized herewith as a ham picture. Which it most unquestionably is.

We came out wishing we had gone to the ball game instead.

The technical details of the picture are high class. In other respects, however, this production, in our opinion, fails to rise above others of its class, and we believe that many will expect greater things from Meighan, Curwood and Brenon.

On the whole, this is something of a disappointment.

The Alaskan seems to be the sort of story that should fit Meighan ideally. He does good work and director Brenon has provided a most satisfying production. And yet the picture seems to fall short.

There are no featured reviews for The Alaskan at this time.