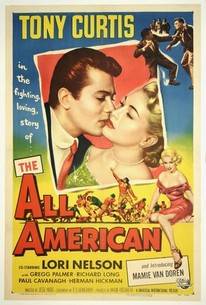 The All American Photos

A loose remake of the 1931 Richard Barthelmess vehicle of the same name, The All-American stars Tony Curtis as college football star Nick Bonnell. When his parents are killed in a traffic accident while taking a bus trip to see him play, Nick quits football cold. Later on he accepts a scholarship at a small college, but still refuses to resume his gridiron activities--at least for a while. Never the life of the party to begin with, Nick runs afoul of his snooty fellow students and is kicked out of school. Somehow or other, however, he manages to show up during the crucial fourth quarter of the Big Game. Lori Nelson plays requisite heroine Sharon Wallace, who helps draw the taciturn Nick out of his shell, while Mamie Van Doren does what Mamie Van Doren usually does. While the football sequences are exciting, the film is a bit hard to take at times, especially when the 20-plus college freshman Nick is advised by his professors to grin and bear it when he's hazed by the much-younger upper classmen. At the time The All-American was released, much was made of the fact that producer Aaron Rosenberg and director Jess Hibbs had both been USC All-American footballers. ~ Hal Erickson, Rovi

George Bozanic
as McManus
View All

Critic Reviews for The All American

There are no critic reviews yet for The All American. Keep checking Rotten Tomatoes for updates!

There are no featured reviews for The All American at this time.

The All American Quotes