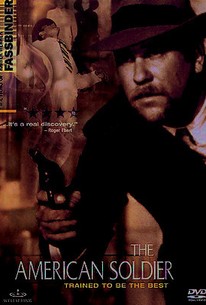 American Soldier (originally Der Amerikanische Soldat) was the third of Rainer Werner Fassbinder's "gangster trilogy." The film stars Karl Scheid as a German/American Vietnam veteran who takes a job as a hired assassin on behalf of the Munich crime lords. Scheid works both sides of the fence when three policemen engage him to knock off some awkward malcontents. ~ Hal Erickson, Rovi

Fassbinder toys with the imagery of noir and pulp, peppering The American Soldier with long scenes of men in hats driving through darkened city streets, and throwing in references to Batman comics and science-fiction.

As Billy Wilder turned a crumbling Berlin into a slapstick, satirical playground in One, Two, Three, so Fassbinder offers up The American Soldier's Munich as a monochrome city of sadness.

This film marks a decisive step towards 'real' Fassbinder: the absurdity of its world of second-hand experience invests every cliché with a meaning it never had before.

The film has a languorous, dreamlike pace, a feeling of slow motion.

This is Fassbinder before he froze up as a Douglas Sirk impersonator: a real punk movie, full of wonderfully half-baked ideas.

Fassbinder loses both comedy and tension in his pursuit of grotesquerie, and there is a desperate sense of strain throughout.

The phantoms of Old Germany are everywhere

It is not as strong or as developed as his later masterpieces, but it is well worth seeing.

It's a strange film noir, but its unyielding manic mood, unpredictability and boldness cover up some of its incomprehensible moments.

You can see how Fassbinder is evolving as a film maker, but his gangster films aren't as strong as his xenophobic work.