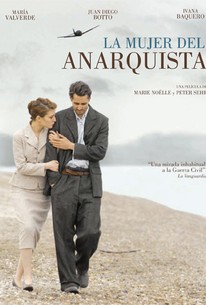 Love and politics pull a couple in two directions at once in this historical drama. It's 1937 in Spain, and Justo (Juan Diego Botto) is a handsome, idealistic radio commentator who is married to Manuela (Maria Valverde), who loves him but doesn't share his passion for social justice. A confirmed anarchist, Justo decides to take up arms and join the battle against Franco's oppressive government, but when he's captured by government forces, Manuela loses contact with him and has no idea what's become of her husband. As the years pass, Justo is held in a variety of prisons while Spain suffers through the Civil War and World War II, while Manuela cares for her children, searches for the man she loves and tries to hold on to the hope that he will someday return. La Mujer Del Anarquista (aka The Anarchist's Wife) received its American premiere at the 2009 Sundance Film Festival.

Jean-Marc Barr
as Pierre
View All

Critic Reviews for The Anarchist's Wife

There are no critic reviews yet for The Anarchist's Wife. Keep checking Rotten Tomatoes for updates!

There are no featured reviews for The Anarchist's Wife at this time.