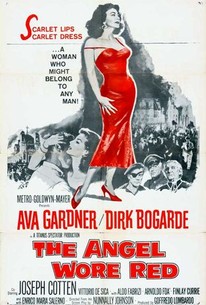 This is an indecisive, ultimately unconvincing wartime drama set in the 1930s when Spain was caught in a bloody civil war, a situation that is never clearly delineated in that the story supports the fascists without specifically saying so. The hero is a voluntarily defrocked priest, Arturo Carrera (Dirk Bogarde) who is being hunted by the leftist, anti-clerical, and anti-fascist forces. While on the run himself, he encounters a beautiful prostitute, Soledad (Ava Gardner) and as sure as the sun rises, the two fall in love and stay together. Eventually, they are both caught by the anti-Franco fighters who are trying to get their hands on a precious holy relic. The ex-priest is trapped into making a no-win decision between his love for Soledad and his love for the church while she has a similar but more tragic decision to make on her own. ~ Eleanor Mannikka, Rovi

Finlay Currie
as The Bishop

Aldo Pini
as Chaplain
View All

An unsatisfactory obscure political film about the Spanish Civil War.

Decent story of the Spanish Civil War with a good performance by Dirk Bogarde. Ava Gardner at the height of her beauty is quite wonderful.