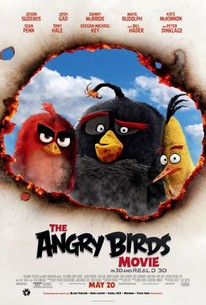 Critics Consensus: The Angry Birds Movie is substantially more entertaining than any film adapted from an app has any right to be -- which may or may not be much of an endorsement.

Critics Consensus: The Angry Birds Movie is substantially more entertaining than any film adapted from an app has any right to be -- which may or may not be much of an endorsement.

Critic Consensus: The Angry Birds Movie is substantially more entertaining than any film adapted from an app has any right to be -- which may or may not be much of an endorsement.

In the 3D animated comedy, The Angry Birds Movie, we'll finally find out why the birds are so angry. The movie takes us to an island populated entirely by happy, flightless birds--or almost entirely. In this paradise, Red (Jason Sudeikis), a bird with a temper problem, speedy Chuck (Josh Gad), and the volatile Bomb (Danny McBride) have always been outsiders. But when the island is visited by mysterious green piggies, it's up to these unlikely outcasts to figure out what the pigs are up to.

Eileen Marra
as The Hatchling Singer

Indra Raval
as The Hatchling Singer

Joaquin Raval
as The Hatchling Singer

Sofie Wolfe
as The Hatchling Singer

Peter Dinklage
as The Mighty Eagle

DC’s Live Action Dark Universe Is Happening, and More Movie News
How Family-Friendly are Ben-Hur and Kubo and the Two Strings?
On DVD This Week: Angry Birds, Gotham, and More

The Angry Birds Movie gets the job done, but there are strange tonal shifts here and a surprising amount of off-color jokes.

The Angry Birds Movie is really not bad. It is actually very actively okay. The film has taken its bird-brained brand... and used it to construct characters and plots that are certainly serviceable, and possibly even inspired.

The Angry Birds Movie is childish and occasionally cute and capitalises on the game's once addictive popularity.

There's not enough here for a full length feature film - something that becomes obvious the longer the movie is on the screen.

Maybe at this point it's too much to hope for an animated film like The Angry Birds Movie to exist as anything other than marketing fodder, but hopefully it's not too much to ask for that #content to have a shred of substance to it.

Angry Birds could be gonzo; instead, it's just kinda... there.

About as plot heavy as you'd imagine a movie based on an app would be. It's an underdog tale with messages of never giving up and being true to yourself but mostly its an excuse for bad bird jokes and lots of fine feathered action.

Why am I even being asked to invest in these cute little bird characters when I know their ultimate fate is a slingshot-launched kamikaze mission?

The Angry Birds Movie is definitely one of the more enjoyable video game adaptations for the big screen, likely because it stays true to the game's style: simple and fun.

These Angry Birds served only to ruffle my own feathers just enough to keep me awake.

There are far worse videogame adaptations than The Angry Birds Movie, but it commits the cardinal sin of animated films: it treats its young audience as an excuse for laziness.

Despite a lot of vocal talent, Angry Birds manages to be as pointless as the game.

Based on the popular video game, The Angry Birds Movie is a quirky kid's film that's mildly entertaining and delivers some fun laughs. The story follows an island of flightless birds who are visited by a group of pigs, but despite their claims of friendship a cynical bird named Red suspects that the pigs are up to no good. Featuring the voice talents of Jason Sudeikis, Josh Gad, Danny McBride, and Maya Rudolph, the cast is fairly decent. And, the animation is well-done, with some interesting character designs and bright, crisp colors. Yet the humor is rather tame and tries to get by on standard slapstick gags and stereotypical silly characters. Playing it safe, The Angry Birds Movie doesn't really try that hard and settles for mediocrity.

Okay, yeah sure, it's a movie cribbed from an Android videogame application but, that being said, it's not bad with all the pop culture references and lame-o bird jokes. It's fun.

Yes I have played this game. Yes I like this game, but yes, going into "The Angry Birds Movie," I was definitely not letting that distract me from whether or not it works as a film; However, to answer that, it actually does. Do not get me wrong, this film is not a good film by any means, but it is a harmless kids tale that kids and adults can easily find humour in, even if it is a little childish/juvenile. "The Angry Birds Movie" follows Red, a very frustrated bird who lives alone and does not like the happy town that he is a part of. Once new neighbors arrive in the pigs, friendships begin to sprout. Even though they seem friendly, Red knows something is up and the eventually turn on the town, devising an evil plan that will eventually bring out the full title of the film in all of the characters. The film is as simple as it sounds, but with all the dumb puns scattered throughout, it really is just a hit-or-miss kids comedy with some adult humour. There are times where I actually thought it went a little too far with the adult references, but it still kept it's footing and stuck to what it knew best throughout the entire duration. I felt that was very commendable and I have to say at least that about it. The animation is beautiful and the animators definitely have something to be proud about in the future. The third act, when the original storyline of the game comes into play was what most people will enjoy the most, as it is quickly paced and pretty fun to watch, aside from that, it does have a lot of issues that can not be ignored. As I said, the problems this film faces are the same troubles that kids films that try to impress everyone has, a clash in tone. There are too many pop culture references dumb puns, and predictable storylines to really make it all that interesting, but it does have a few serviceable gags to keep viewers interested. If you are a die hard fan of this game and wish to see these characters brought to life, you may get a kick out of the easter eggs thrown in here and there, but at it's core, it's a cliched kids film with nothing else to say. The film begins and ends. it doesn't drag, which as good, and the message at the end was predictable, even if pleasant. "The Angry Birds Movie" is not really a good film by any means, but for taking an app and turning it into feature film and trying to satisfy all ages, I think they did they best they could with what they were given. Commendable, but ultimately forgettable. "The Angry Birds Movie" will not make fans angry, but it won't make them entirely happy either.