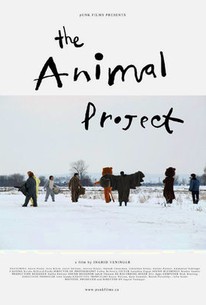 A frustrated theater director and single father attempts to inspire creativity in his acting troupe by instructing them to don animal costumes, and lose themselves in character while venturing out into the streets. Inspired by one of his troubled teenage son's former projects, he sees the challenge as an opportunity to prod the performers out of their comfort zones and become a better father in the process.

Critic Reviews for The Animal Project

At times, Animal strikes a compelling, raw quality, but this is largely lost due to the overwritten script and sprawling, though lovingly rendered, cast of characters.

At times unfocused, The Animal Project rises above some limitations to be surprisingly heartfelt and often emotional ...

The animal costumes remain the most arresting aspect of The Animal Project. There's nothing sadder than the image of a man in an owl suit who's just been turned down for his offer of a free hug.

There are no featured reviews for The Animal Project at this time.