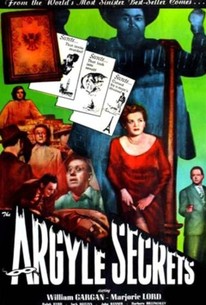 Only faintly related to the old stage play The Argyle Case, The Argyle Secrets is based on a half-hour radio program originally heard on CBS' Suspense. In the immediate postwar years, several above-suspicion Americans attempt to hide their past collaborations with the Nazis. Reporter William Gargan refuses to let sleeping dogs lie, however, and tracks down some of these fifth columnists. The film's "Macguffin" is a set of incriminating papers, which are stolen early in the proceedings. The supporting cast of this Film Classics programmer includes future Danny Thomas Show co-star Marjorie Lord and former "Dick Tracy" portrayer Ralph Byrd. The Argyle Secrets was written and directed by one-time MGM film editor Cyril Endfield, later the man behind the megaphone on Zulu (1964).

Critic Reviews for The Argyle Secrets

There are no critic reviews yet for The Argyle Secrets. Keep checking Rotten Tomatoes for updates!

There are no featured reviews for The Argyle Secrets at this time.