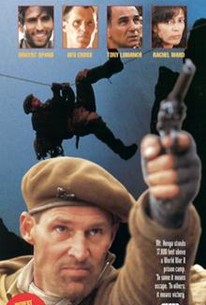 The most notable thing about this Italian drama, set in British East Africa (Kenya) during WW II, is it's scenery. It follows the factual adventure of an Italian POW, Franco Distassi, interred in a British camp run by African subjects. The camp is close to Mount Kenya, one of the most challenging peaks for mountain-climbers. The chief officer, Major David Farrell, a recent widower and unambitious officer, wants to climb Mount Kenya. He is also interested in a lovely local widow. He has failed in his attempts for both the mountain and the woman. POWs Franco Distassi challenges Maj. Farrell to a climb. He and a partner, Enzo, create a plan, which may involve an escape, to place the Italian flag at the summit and then sneak back to camp. Franco dislikes the notion of planting the flag, but persists in the endeavor after Enzo must quit. He is pursued by the enraged and envious Major.

Critic Reviews for The Ascent

uses the nearly abstract depiction of the snow-choked landscape to strike us with bone-chilling intensity, but also transforming Sotnikov's experience into something that approaches the divine

There are no featured reviews for The Ascent at this time.