The Autopsy of Jane Doe2016 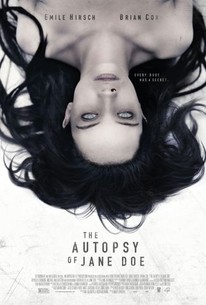 The Autopsy of Jane Doe Videos

The Autopsy of Jane Doe Photos

It's just another night at the morgue for a father (Brian Cox) and son (Emile Hirsch) team of coroners, until an unidentified, highly unusual corpse comes in. Discovered buried in the basement of the home of a brutally murdered family, the young Jane Doe-eerily well preserved and with no visible signs of trauma-is shrouded in mystery. As they work into the night to piece together the cause of her death, the two men begin to uncover the disturbing secrets of her life. Soon, a series of terrifying events make it clear: this Jane Doe may not be dead. The latest from Trollhunter director Andre Ovredal is a scarily unpredictable, supernatural shocker that never lets up.

News & Interviews for The Autopsy of Jane Doe

View All The Autopsy of Jane Doe News

Critic Reviews for The Autopsy of Jane Doe

Fans of the genre will rejoice in the rare sight of a new kind of threat. They will celebrate further at the director's success in satisfactorily exploiting a challenging premise.

This chilling chamber piece from the Norwegian director André Ovredal is an exercise in restrained horror.

The second half is merely morbid runaround, punctuating its soundtrack crashes with self-justifying footnotes on historical misogyny.

It's hard to think of another film that has brought such lip-smacking relish to its sound design.

It redefines gooseflesh. Hell your scalp will crawl right off of you and into the seat beside you and then demand some of your popcorn, if you let it.

I thought the director did a great job at keeping that high tension and the jump-scare feel for the new horror fans and the old ones.

The Autopsy of Jane Doe is another strong horror film in a pretty good year for the genre.

From the moment this film begins, the viewer is on a constant spine-chilling ride that unleashes a plethora of frights.

The Autopsy of Jane Doe is smart, taut, gory, funny, and tense, doling out just enough information and never over explaining.

Screenwriters Ian Goldberg and Richard Naing have constructed a tightly wound, beautifully paced, and utterly terrifying bundle of darkness that doesn't forget to inject its characters with enough personality to make us care.

Audience Reviews for The Autopsy of Jane Doe

A decent (yet irregular) horror movie that relies on a compelling mystery and knows how to slowly build tension (despite a few annoying jump scares), but it is also a bit frustrating to see how it is weakened by clichés and by a silly ending that doesn't really work.

Surprised as to how liked this movie is. A truly unsuspenseful movie with no scares.

Pretty average. I'm surprised the ratings are so high.

The Autopsy of Jane Doe Quotes