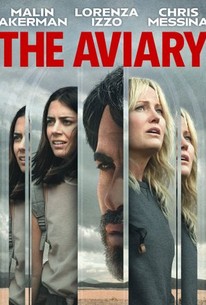 Malin Akerman, Lorenza Izzo, and Chris Messina star in this twisted thriller about two women's desperate attempt to flee the clutches of Skylight, an insidious cult. Trapped at Skylight's isolated desert campus, The Aviary, Jillian (Akerman), and Blair (Izzo) join forces to make a treacherous escape. Alone in the harsh wilderness, they are consumed by paranoia and unable to shake the feeling that they are being followed by the cult's leader, Seth (Messina), a man as seductive as he is controlling. With supplies dwindling and their senses failing, Jillian and Blair are faced with a horrifying question: how do you run from an enemy who lives inside your head?

Critic Reviews for The Aviary

There are no critic reviews yet for The Aviary. Keep checking Rotten Tomatoes for updates!

There are no featured reviews for The Aviary at this time.