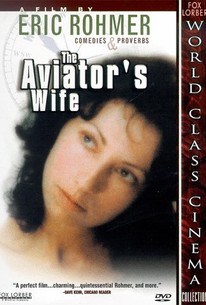 Franois, a young student working nights as a postman, is in love with a slightly older woman, Anne. One day, he sees Anne's former lover, a pilot named Christian, leaving Anne's apartment in the morning. Despite Anne's explanation that Christian is now married to another woman and simply dropped by to talk, Franois becomes jealous. He starts spying on Christian in order to find out if his rival secretly sees Anne. Though Franois sees Christian meeting a different woman, he keeps following the pair. His pursuit leads him to a park where he meets up with a vivacious teenage girl named Lucie, who becomes curious about his motives and agrees to help him in his detection. ~ Yuri German, Rovi

Eric Rohmer's The Aviator's Wife returns him to form as a master of the wry, witty, ironic and indefatigably cerebral detective story of the emotions.

In astute, luminous jaunts through city streets and parks, Rohmer constructs an exquisite web of coincidences that he elevates into a sort of destiny.

It also contains a wonderful, quiet wit, and a view of its characters that could be called affectionate anthropology,

This pragmatism doesn't necessarily foster clarity, however. If anything, it makes the material seem thin.

[T]hough the meandering has a certain (non-whimsical) charm, and [Anne-Laure] Meury [as Lucie] is innocently captivating, the film takes too long to reveal its coherence.

Everything is told in such a sincere and direct way. Despite its conventionalism, the film becomes a mirror of a complex couple in an omnipresent Paris. [Full Review in Spanish]

The Aviator's Wife is a delightful study of self-absorbed individuals enslaved to their own misreadings of events.

There are no featured audience reviews yet. Click the link below to see what others say about The Aviator's Wife (La femme de l'aviateur)!