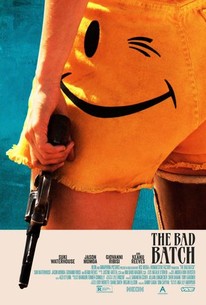 Critics Consensus: The Bad Batch has its moments, but it's too thinly written and self-indulgent to justify its length or compensate for its slow narrative drift.

Critics Consensus: The Bad Batch has its moments, but it's too thinly written and self-indulgent to justify its length or compensate for its slow narrative drift.

Critic Consensus: The Bad Batch has its moments, but it's too thinly written and self-indulgent to justify its length or compensate for its slow narrative drift.

The aforementioned girl is Arlen, (Suki Waterhouse), one of thousands of Americans deemed unacceptable to society, who is unceremoniously dumped into a hostile desert wasteland fenced off from civilized society. While wandering in her desert exile, she is captured by a savage band of cannibals and quickly realizes she'll have to fight for her very existence in this human-eat-human world. With electrifying visuals, a score to die for and a stellar cast, Amirpour has created another cinematic chapter that is as uncategorizable as her first.

Giovanni Ribisi
as The Screamer

Keanu Reeves
as The Dream

News & Interviews for The Bad Batch

The 21 Masters Of Horror Shaping the Genre Right Now
Transformers: The Last Knight Has Neither the Touch Nor the Power

View All The Bad Batch News

Critic Reviews for The Bad Batch

The Bad Batch never organizes itself around a coherent idea or works up the urgency to pay off its premise.

The Bad Batch has enough flashy, fashionably grim accessories and accoutrements to fill a Hot Topic.

The Bad Batch squanders its strong start and rich setting on a too-thin plot.

A film with neither engaging emotional threads nor the kind of panache that makes such cinematic mayhem worth it.

It's a trippy, sun-scorched apocalyptic horror film with a rom-com finish that gets as bloody, visceral and cannibalistic as its U.S. R rating will allow.

Sad, without such a limp noodle in the lead I really could've gone places with The Bad Batch - there's whole lots to love stuffed and sauteed at its margins

With a powerful soundtrack accompanied by a strong visual proposal, The Bad Batch reminds us more of a good video clip than a film. [Full review in Spanish]

Starts strong with startling images but every time it works up a head of steam it veers off track. Its languid pace and stretched-out story makes the two-hour running time feel much longer.

[The Bad Batch] never manages to develop itself beyond its surface appeal, and it ultimately works as little more than an amalgam of fanboy curiosa.

The Bad Batch will not sit well with everyone, and it's not designed to. But it's refreshing in a summer movie season that seems agonizingly designed to please everyone all the time to watch a film that simply doesn't give a f---.

A catapult of visual and thematic ideas without much sense, but of unquestionable magnetism. [Full Review in Spanish]

Audience Reviews for The Bad Batch

In a desert prison, the scum of humanity has either turned to cannibalism or a poor but hedonistic settlement. What could be a pretty wild albeit disgusting adventure is a slow, aimless story of revenge and redemption, with a pointless drug sequence dragging down the middle. A film like a cannibalistic Burning Man Festival in slow motion: superficially great to look at but actually pretty ugly deep down and only bearable when you're on drugs. Only Jim Carrey's mini role is fascinating and the solution surprisingly light-hearted.

Great cinematography and framing. Exceptional acting. But pacing is too slow, like quicksand pace. The Jim Carrey cameo is lightly amusing because of its contrast to the Jim Carrey archetype he developed in the 90s. The graphic cannibalism is pretty extreme if that's something you look for in a post apocalyptic movie. Story is a little boring for this genre, relies heavily on genre conventions without providing any interesting innovation or commentary on it. If you want something action packed, turn away. If you're looking more for a Boy and his Dog, 20 Years After, The Road, or Children of Men vibe, this will do.

The film is just a daring vision of an idea, I look at this film and I get insanely jealous. The director is visually gifted and while the story can be somewhat bleak, the slow beats and character shifts this from anything I have seen this year. Jim Carrey is brilliant in the Hermit role, It took some time to notice him but this shows the range he has to offer. The setup is very grim and that sets the film up for the next 2 hours, this film isn't for everyone so you'll know very quickly if this is for you. I really dug this film, there was a story that hooked me which a lot of film cannot. 03-10-2017.