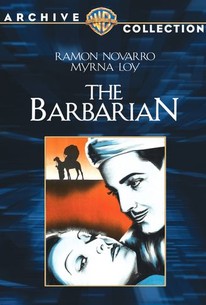 In this drama, Diana (Myrna Loy) is a beautiful tourist from the United States who is visiting Cairo, accompanied by her Uncle Cecil (C. Aubrey Smith) and Aunt Powers (Louise Closser Hale). Diana is to meet her fiance Gerald (Reginald Denny) in Cairo, but she soon makes the aquaintance of Jamil (Ramon Novarro), a handsome local who works for the hotel as a tourist guide. Jamil returns Diana's lost dog, earning her gratitude, though she's unaware that Jamil took the dog himself so that he could return it to her. After several days of showing Diana Cairo's most magificnet sights (and scheming to keep Gerald at a distance), Jamil reveals his secret to Diana -- that he's actually an Arab prince who wants Diana's hand in marriage. However, Diana isn't especially taken with this idea at first, and and before long the darker side of Jamil's infatuation makes itself known. The Barbarian was based in part on one of Ramon Novarro's silent hits, The Arab, and the film inspired more than a few raised eyebrows in 1933 thanks to a scene where Myrna Loy swims in the nude at an oasis, though Loy later wrote that she was wearing a flesh-colored body stocking in deference to her modesty (and the censors). ~ Mark Deming, Rovi

Critic Reviews for The Barbarian

There are no critic reviews yet for The Barbarian. Keep checking Rotten Tomatoes for updates!

Audience Reviews for The Barbarian

Let's start with the positives - you have the very beautiful Myrna Loy appearing in a bathtub for goodness sake, a suave Ramon Novarro wooing her with beautiful songs, and an exotic pre-code tale set in Egypt. Where modern viewers will struggle is with the scenes in the desert, where Novarro mistreats and later rapes Loy. What started out as a forbidden romance, albeit with borderline creepiness in Novarro's persistence, becomes cringe-inducing, and I have to say, I also hated the ending. Men forcing themselves on women until they gave in was de rigueur for the time, and the fantasy about Arabs post-Valentino was still strong in America, but the film would have been stronger had it either had Novarro's character been truly honorable ('Barbarian' indeed), or Loy's ultimately capable of resisting him if he wasn't. As it is, one feels conflicted and kind of icky with the message it conveys about both Arabs and women. And yet, Loy and Novarro are both pretty compelling, and make it worth watching. Did I mention Loy appears in a bathtub?