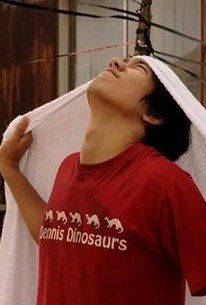 A mentally deficient farmer falls for a pretty teacher who's still struggling to cope with the recent death of her unfaithful boyfriend. Yojin (Kenichi Matsuyama) puts all of his energy into nurturing his grandmother's organic vegetable garden. The harvest has never been very impressive, though he still performs his duties with optimism and energy to spare. One day, seemingly out of nowhere, Tokyo beauty Machiko (Kumiko Aso) appears in the countryside. A friendly nursery school teacher, Machiko has moved to the country to forget about her deceased boyfriend, who was recently killed - alongside his secret lover - in a fatal car crash. Before long Yojin is experiencing an entirely new sensation -- he longs to spend every spare minute with Machiko, and rues the thought that she might not feel the same way about him. Yojin has never been a model of self-control, but his instinct is to reign himself in around Machinko. As their relationship grows deeper, Yojin's attempts to charm Machinko have unintended consequences.

There are no critic reviews yet for The Bare Essence of Life (Urutora mirakuru rabu sutôrî) (Ultra Miracle Love Story). Keep checking Rotten Tomatoes for updates!

There are no featured audience reviews yet. Click the link below to see what others say about The Bare Essence of Life (Urutora mirakuru rabu sutôrî) (Ultra Miracle Love Story)!