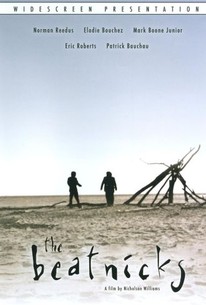 Musician Nick Nero (Norman Reedus) and poet Nick Beat (Mark Boone, Jr.) are two luckless dreamers in search of a paying gig when they discover a mysterious box with the power to make all of their wildest dreams come true. With a wealth of infinite beats now at their disposal, the hapless misfits set their sights on performing at the Monkey Club, the city's hottest night spot. But when Nick Nero falls for club owner Mack Drake's (Eric Roberts) captive bride Nica (Elodie Bouchez), it all starts to fall apart. After uniting to perform their biggest gig yet, the two Nicks embark on a quest to return the box to its rightful owner.

Jon Gries
as B Cool

Lisa Marie
as Sophie
View All

Critic Reviews for The Beatnicks

There are no critic reviews yet for The Beatnicks. Keep checking Rotten Tomatoes for updates!

Audience Reviews for The Beatnicks

There are no featured audience reviews yet. Click the link below to see what others say about The Beatnicks!