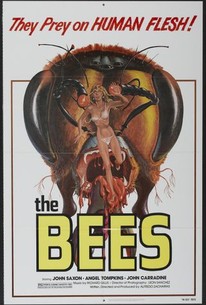 This hilariously awful killer-bee epic from director Alfredo Zacharias features surprisingly good special effects and horrible acting. Cult favorites John Saxon and Angel Tompkins star as scientists trying to deal with a U.S. invasion by trillions of sentient bees. The bees want humans to stop polluting the environment and they enlist Saxon to deliver their ultimatum to the United Nations. As Uncle Ziggy, John Carradine, before being shot by hitmen, delivers his dialogue as if speaking through dry heaves in a bad German accent. There are some exciting scenes of mass destruction as swarms of bees attack large crowds (including the Rose Bowl Parade, where President Ford is seen briefly) and then Saxon comes up with a plan. His proposal suggests the use of a chemical which turns the bees homosexual ("That reminds me of a certain neighborhood I know in L.A.," says one delegate). Eventually, Saxon goes to the U.N. to deliver the bees' message, only to meet with scorn. Naturally, billions of bees then burst into the room to plead their case. There are some well-done plane crashes, the bee scenes are realistic and incredibly numerous (a scene where they carpet Saxon's bedroom is astounding), and the storming of the U.N. is a classic. But all of this is compromised by annoying geometric wipes between scenes and some of the worst writing and acting to ever survive the cutting-room floor. Oddly enough, the same year's big-budget The Swarm would not improve on any of these areas, and is not as funny as this film either.

Critic Reviews for The Bees

There are no critic reviews yet for The Bees. Keep checking Rotten Tomatoes for updates!

Audience Reviews for The Bees

Starts out okay, then becomes silly.