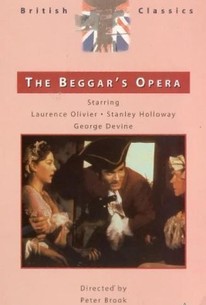 Laurence Olivier makes his singing debut in this lively adaptation of John Gay's 18th century theatrical piece The Beggar's Opera. Olivier stars as Captain MacHeath, the leader of all bandits and cutthroats in England. MacHeath is in love with Polly Peachum (Dorothy Tutin), the daughter of beggar king Peachum (George Devine). He has also dallied with Lucy (Daphne Anderson), the offspring of corrupt constable (Stanley Holloway) Lockit. Since it is in the best interest for both Peachum and Lockit to rid the world of MacHeath, the two conspire to imprison and hang the scoundrel, but an unexpected turn of events rescues MacHeath from the executioner's noose. Adapted for the screen by Dennis Canaan and Christopher Fry, The Beggar's Opera manages to retain the raffish charm of the stage original while still being wholly cinematic in approach and execution. The same basic story was later retooled by Bertolt Brecht and Kurt Weill as The Threepenny Opera. ~ Hal Erickson, Rovi

Hugh Griffith
as The Beggar

Critic Reviews for The Beggar's Opera

Sir Laurence Olivier does his own singing - in a pleasant but ohso-tentative and timid baritone - in this colorful, tuneful British screen version of John Gay's eighteenth-century opus. On the whole an enjoyable production.

Audience Reviews for The Beggar's Opera

There are no featured audience reviews yet. Click the link below to see what others say about The Beggar's Opera!