The Beginning or the End1947 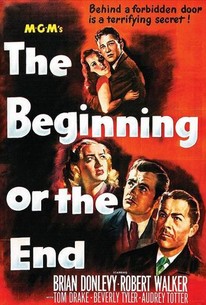 The Beginning or the End Photos

Filmed not long after the actual events, The Beginning or the End is a sober, intelligent account of the development and deployment of the Atom Bomb. Step by step, the film details the progress of The Manhattan Project, from its inception in the early stages of the war through the dawn of the Atomic Age over the city of Hiroshima on August 6, 1945. Brian Donlevy stars as Brigadier General Leslie Groves, assigned by President Roosevelt (Godfrey Tearle) to act as military supervisor of the top-secret project at Oak Ridge, Tennessee. After a grueling trial-and-error period, the first atomic bomb is tested before an assemblage of scientists and military personnel-even though there's the disturbing possibility that the explosion may cause a chain reaction that will wipe out all mankind. Woven into the proceedings is an unnecessary but innocuous romance between idealistic young scientist Matt Cochran (Tom Drake) and his new bride Anne (Beverly Tyler), who cannot understand why she and her husband are forced to live in isolation with scores of other scientists and their families because Matt, like his associates, has been sworn to total secrecy. Though the Cochrans are fictional, many real-life participants in the Manhattan Project are depicted herein, including J. Robert Oppenheimer (played by Hume Cronyn), Enrico Fermi (Joseph Calleia), Albert Einstein (Ludwig Stossel) and Col. Paul Tibbetts (Barry Nelson), pilot of the bomb-bearing Enola Gay. Refreshingly free of propagandizing, Beginning or the End would make an excellent companion feature to Fat Man and Little Boy (1990), a highly politicized retelling of the same events. ~ Hal Erickson, Rovi

Jim Davis
as Pilot at Tinian

Critic Reviews for The Beginning or the End

The Beginning or the End is a masterful movie which tells the most dramatic story of our time with true power and suspense.

There are no featured reviews for The Beginning or the End at this time.

The Beginning or the End Quotes