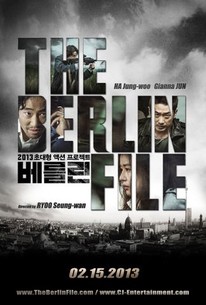 A tense illegal arms deal in a Berlin hotel suddenly descends into mayhem after a "ghost" agent named Jong-seong (HA Jung-woo) appears on the scene. Secretly watching the deal go down is embattled South Korean intelligence chief Jin-soo (HAN Suk-Kyu), the North Koreans and the US CIA, who are all left trying to decode whether the ghost is a double-agent or taking the fall for a more insidious plot. Myung-soo (RYOO Seung-bum) a young, notorious North Korean agent jumps into these treacherous waters to investigate loyalties of all involved and begins to implicate Jong-seong's wife, Jung-hee (Gianna JUN), a translator at the North Korean embassy in the German capital. Caught between his love of country and his wife, Jong-Seong must quickly prepare to make the ultimate sacrifice. (c) CJ

Critic Reviews for The Berlin File

There is something sharp, exciting and more original tucked within "The Berlin File" - and it is in moments a sleek, crackling film - but it all feels somehow misshapen.

As soon as "The Berlin File" takes flight with its exhilarating action set pieces, memories of any muddles evaporate amid the tension and vivid engagement with settings, from courtyards to fields.

The Berlin File benefits from gritty surroundings that add a cold war realism to this otherwise confusing tale of conflicted loyalties and secret agendas.

A sporadically entertaining, modestly ambitious shoot 'em up that frequently succumbs to spelling out its subtext.

The story feels fairly perfunctory - not to mention unnecessarily knotty - but the well-connected leads do their best to ground it.

[A] formulaic but solid Cold War-style spy thriller, with North Korea pinch-hitting for the Soviet Union.

A highly underrated thriller from South Korea set in the German city of Berlin, off all places.

Seung-wan's The Berlin File is evidence of a visual master working with a budget that allows him some breathing room for some choice sequences.

Retrospectively cold war in tone this provides action more brutal than balletic and the promise of a Bourne-style franchise in the making.

The movie offers just about all you could ask of a genre flick: poisonings, defections, a secret North Korean bank account, gloriously choreographed fights that go insanely over the top, febrile tension and doomy romance (but no sex).

'The Berlin File' takes Hollywood's penchant for spectacle and ADD visual neurosis to its logical albeit absurd conclusion.

Audience Reviews for The Berlin File

Ryoo Seung-wan pulls out the agents and crosses them in The Berlin File.

Running nearly 2 hours, there is more than enough to follow when it comes to the story. While the pacing of the film isn't necessarily fast, plot details come and go often enough to easily throw things into a bin of shredded paper. In short, the story requires attention to grasp, especially in the first half. Fortunately, things become clearer by the film's final act.

The action is nicely done with the highlight happening at the end. It is a good mixture of realism and stylization.

Jung-woo Ha, Suk-kyu Han, and Ryoo Seung-Bum share the screen as the three major leads. Gianna Jun, as eye catching as she is, ends up overshadowed by the other three.

The Berlin File agreeably fits into the action crime thriller genre and is therefore a recommendable Korean picture.