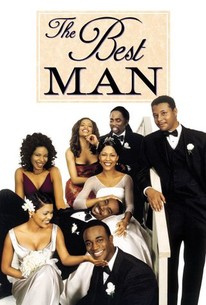 Critics Consensus: With a strong cast and a host of well-defined characters, The Best Man is an intelligent, funny romantic comedy that marks an impressive debut for writer/director Malcolm D. Lee.

Critics Consensus: With a strong cast and a host of well-defined characters, The Best Man is an intelligent, funny romantic comedy that marks an impressive debut for writer/director Malcolm D. Lee.

Critic Consensus: With a strong cast and a host of well-defined characters, The Best Man is an intelligent, funny romantic comedy that marks an impressive debut for writer/director Malcolm D. Lee.

In this romantic comedy, a writer finds out the hard way about the consequences of walking a fine line between fiction and real life. Harper (Taye Diggs) is an author whose first novel is soon to be published, just as he's been asked to be Best Man at the wedding of his friends Lance (Morris Chestnut) and Mia (Monica Calhoun). Harper is suffering a worse case of publication-day jitters than most authors, and with good reason: much of his book has been drawn from real life, and he's afraid that his friends and family will spot the sometimes unflattering literary versions of themselves. What's worse, Mia and Harper had a fling years ago, and their affair made it into the book; Lance doesn't know, and Harper would just as soon he didn't find out before the wedding. But one of the bridesmaids, Jordan (Nia Long), has gotten hold of an advance copy of the book. Since Jordan works as a television journalist and devotes her life to digging up dirt on people, Harper is convinced that she'll spill the beans and spoil his friends' big day. The Best Man was the debut film for writer/director Malcolm D. Lee; Spike Lee served as producer. ~ Mark Deming, Rovi

Doug Banks
as Himself

Dede Maguire
as Herself

Critic Reviews for The Best Man

Ultimately when it's all said and done, Best Man remains always a groomsman, never a groom: It backs down on its promise to both challenge and entertain, opting instead for the easy laugh--and the pat ending.

Viewers who mistake the didacticism for stylistic weakness miss much of the point of this nicely toned movie.

So much for the under-powered plot, from tyro writer/director Malcolm D Lee, to which the tiresome unearthing of nice guy Harper's previous dalliances contributes little.

In his earnestness Lee forgets that we need engagingly defective objects of mockery for comedy to work and instead falls back on characters who exhibit no demeaning flaws.

Malcolm D. Lee is clearly a director to watch.

Lee comes at the topics refreshingly, taking the African-American male, one of the least explored groups in film, and placing him under a microscope, not for judgment, but for observation.

The wedding weekend entails predictable conflict and resolution, by way of some excellent performances.

A fresh romantic comedy that's somewhat let down by a wayward plot, The Best Man is well worth watching for the outstanding ensemble acting and the intelligent, schmaltz-avoiding handling of love, marriage and friendship.

The Best Man is a decent character driven effort and a light night out at the movies.

Audience Reviews for The Best Man

Great characters that are instantly identifiable and who many can relate to combine with great direction to tell a story of how friendship can transpire over many years. Funny at times but ultimately a positive and strong message keeps you watching and check out the sequel too.

So last week I got a copy of "Best Man's Holiday". Sat down with my wife to watch it and realized, that I didn't remember anything from the first one. Actually, don't think I had ever seen it. So we stopped the dvd, and found the first one on M-GO and started watching it. First, it's amazing at how all the actors look so young. Second, this is a horrible movie that doesn't stand the test of time. Maybe in 1999 when it came out it was a good movie. But today, after countless other movies just like it, that are much better(looking at you Tyler Perry), this is a waste of time. I was bored, fell asleep and forced myself to finish it(it wasn't easy). I like the entire cast. Taye Diggs, Morris Chestnut, Terrence Howard, Nia Long, are all great. But in this they are all still very green and hadn't hit their stride yet. Now I know, that's not fair because it's 15 years later, but it's true. Maybe if I had watched this when it came out I would remember it as a classic that launched careers. But watching it now, it's just another bad comedy dominated by an African American cast. Everything about it is generic and unfunny. Emily fell asleep and I laughed maybe one time. Again, if you're a long time fan, cool! But if you're not, then this is a bad movie to revisit. I took back my copy of "Holiday" without watching it, but do plan to eventually. I'm sure it's better, because I doubt it could be more worse.

Taye Diggs is Harper Stewart, a struggling actor who flies to New York to be the best man of his college buddy's wedding and just completed a novel called "Unfinished Business." The book contains characters loosely based on his friends from college and mentions that at one point he slept with the bride to be. Can he stop people recognizing the thinly veiled truth as he prepares to be the best man at his best friend's funeral or will past betrayals finally be brought to the surface at the most unfortunate of times? This is a story of love, lust, imperfection and redemption and "becoming the best man that you can be."