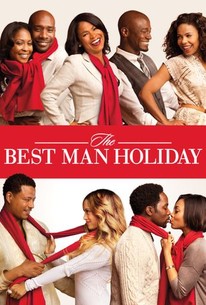 Paulina B. Abarca
as Esmeralda

Pam Oliver
as Herself

Greg Gumbel
as Himself

Eddie George
as Himself

Marsha Ambrosious
as Herself

Anthony Hamilton
as Himself

The result is a joyous, raucous, righteous film but also a frustrating and disappointing one. Not quite the gift of the season some had hoped for.

Yet for all its tonal missteps and traditional tropes, "The Best Man Holiday" has something rare at its very center - genuine emotion.

Touching, fun, unexpected yet a bit disjointed, The Best Man Holiday will satisfy die-hard fans of the first film and help usher in the holiday movie season.

The first half is such an agreeably raucous reunion that we hate to see a pesky thing like terminal illness ruin all the fun.

You leave emotionally exhausted, but there's a lot of care in this movie.

You'll see everything coming a mile away, you'll feel manipulated but you'll also laugh and maybe even shed a tear.

While The Best Man Holiday is far from flawless, it's a solid and reasonably entertaining effort.

I like being around these characters, and wouldn't mind visiting them again sometime down the line ... It's too bad they exist in a story that lacks the same charisma they have.

The Best Man Holiday works -- largely because of its cast. The actors feel at home with these characters. They are having fun, and that fun is transferred to the audience.

Lee's narrative does a good job of balancing weighty drama with comedic moments. Most importantly, the various quandaries Harper and co find themselves in feel real, relevant and grounded.

The Best Man Holiday offers up heaps of laughs and tears, and was a pleasant relief from all of the dreary films as of late. This is one Holiday I plan to revisit every year.

So-so. Didn't love or hate it. The story follows a group of friends meeting up for Christmas and is pretty much just about their relationships. It is apparently a sequel to a movie I never saw. Perhaps I would have liked this more if I had. I did struggle a little to keep straight who was who not having seen the backstory. Gets quite sad mid way through, which I did not expect. Also a very unrealistic song and dance routine by the men, all dressed exactly the same. Felt like watching a music video in that part!

So a few months ago I got a copy of this and before I watched it I realized I didn't remember the first movie. So I went back and re-watched and hated it. But me being a big movie whore, still had to go and watch the sequel. What a waste. This movie is boring and a real poor man's Tyler Perry movie. It's not funny at all, and the drama is so melodramatic that I didn't care for anyone in this. Here's a movie that needed Kevin Hart to add some real comedic spice. Instead you get some crap about a bunch of friends spending Christmas together, and one has cancer. Just not a good movie, even Emily was bored to tears with it. If you enjoyed the original, then I'm sure you were all gung ho for this. Good for you, I'm glad someone liked it. But for me, this just wasn't good at all. I'll probably still see a third one(if they make it), but it'll help me sleep more than anything.

Times change. Friendship doesn't. Good Movie! Best Man's Holiday, is a timely-well written and acted movie. It touches on so many social issues people are going through in the now. It is surprising how emotional involved you will be caught up in scenes. It's a roller coaster of highly amusing moments on second, followed by an altar call of your conscience reflecting on unresolved past issues the next. This story was deeply moving and the transitions and transformations of some of the characters was very endearing. The way the friendships move in and out in natural progression was, dare I say, realistic in nature. Overall, the film is worth the time. When college friends reunite after 15 years over the Christmas holidays, they will discover just how easy it is for long-forgotten rivalries and romances to be ignited.

Mia: I can't tell you how great it is to have all of us under the same roof again. I feel like I already might be surprising people by saying this film is a sequel. Back in 1999, The Best Man was released in theaters and became something of a sleeper hit. Along with The Wood (also starring Taye Diggs), the all-black romantic-comedy-drama scene was still a solid subset of films around this time, as it pre-dated the era of Tyler Perry and allowed for less gimmicky takes black characters living everyday lives. Now we have a follow up film, which explores what has come of a certain group of characters a decade and a half later. While it is not as exquisitely told a tale, compared to Richard Linklater's Before trilogy, which are films also separated by a lengthy span of time, The Best Man Holiday is still a film that works based on the chemistry of the ensemble cast, regardless if one is familiar with these characters already or not. read the whole review at thecodeiszeek.com