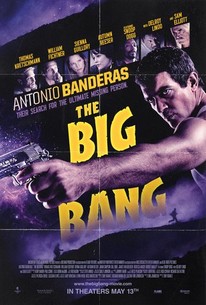 Late one night, Los Angeles private investigator, Ned Cruz (Antonio Banderas) gets a visit from a recently paroled Russian boxer with an intriguing job offer: find Lexie, his missing girlfriend-and the 30-million dollar stash of diamonds she's hiding. As Detective Cruz sets out to find her, the clues send him into the city's seediest corners, from a Hollywood action star with a dirty little secret (James Van Der Beek), to an enterprising porn producer who takes a personal interest in his own work (Snoop Dogg), and a kinky waitress with an unusual fetish for particle physics (Autumn Reeser). Lexie proves to be as elusive as she is beautiful and Cruz becomes obsessed with finding her. With time running out, Cruz discovers the trail leads to reclusive billionaire (Sam Elliott), and his physicist (Jimmi Simpson), intent on recreating The Big Bang underneath the New Mexico desert. Tailed by a trio of cops also looking to find the missing diamonds, and with the body count piling up, Cruz soon realizes that what appeared to be a standard missing person's case is anything but, and could quite possibly bring about the end of the world as we know it. --(c) Anchor Bay

Chandra Bailey
as Stripper in Minkowski's

Janelle Hoffmeister
as Stripper in Minkowski's

Kristi Klicker
as Stripper in Minkowski's

Katrina McKinley
as Stripper in Minkowski's

Adrienne Thommes
as Stripper in Minkowski's

Balkar Singh
as Sikh in Collider

Darbara Singh
as Sikh in Collider

News & Interviews for The Big Bang

View All The Big Bang News

Critic Reviews for The Big Bang

Where else can you see a movie where a sexy waitress says, "Reality is just a wave function"?

For a noir, the film is way too talky and convoluted, yet for a physics lesson, it's trash.

Is Antonio Banderas's career really such a big bust? On the one hand, it's a shame to see a talented guy slumming in this budget-bin thriller. On the other, it'd be entirely unwatchable without him.

Even with Antonio Banderas leading a cast of familiar faces, the movie never rises above a style-over-substance exercise.

I have a mental picture of the film's creators, stoned out of their minds on who knows what, cackling crazily as they outline a movie that would have more appropriately been titled "The Big Goof."

The Big Bang is a borderline unintelligible, scattershot attempt at Lynchian neo-noir that takes intellectual and aesthetic risks it has no reasonable hope of pulling off.

Film noir for physics geeks, The Big Bang ... is a clever, if relentlessly dramatic (despite stabs at levity), existential detective story.

he script ultimately wastes the talents of actors

A colossally strange film noir misfire, The Big Bang tries to inject the soupy moodiness of the noir genre with a surfeit of cool and edgy thrills, but, ironically, it's actually just a big snooze.

Doesn't always supply the smoothest ride of revelations and comeuppance, spending more time sorting out its homework than dealing with the sweet slings of sleaze and suspense that often define the genre.

The film's bleary, neon glamour and penchant for the bizarre suggests an attempted -- and wayward -- homage to David Lynch.

Audience Reviews for The Big Bang

Watchable, but just barely. It must have been an intriguing script, because it attracted talent who surely had other options. So, let's pin the blame on a pretentious director who was totally NOT in control of his material. This started out interesting, and quirky, but went downhill at lightening speed. What a waste of talent...

A smart, sharp and outragiously weird crime-thriller that`s loaded with a great sense of classic film noir style, ideas and star-power. One of the most original and stylish films of the year. It`s strange, bizare and insanely enjoyable. A wickedly enjoyable and exciting edge of your seat thriller that`s just alot of fun to watch. It bends the laws of physics but still manages to be a clever and entertaining suspense-filled detective story that`s packed with great characters and humor. It`s hard-boiled and wickedly funny. Its a film that dose not try to be anything else but its own. The all-star cast is brilliant. Antonio Banderas is fantastic, this is his coolest and most enjoyable performance since The Mask Of Zorro. Sam Elliot is wild and outstanding. Thomas Kretschmann, Delroy Lindo and William Fitchtner are excellent. An explosive and unstoppable good time

An L.A. private eye (Antonio Banderas) goes looking for a missing stripper and uncovers a twisted plot involving the Russian mob, stolen diamonds, and the search for the God particle. The extreme stylization and ultra-quirky twists with will make it just watchable for some but completely intolerable for others. Film noir fans won't be fans of this: the faux-Raymond Chandler narration is pathetic, and other than ethnicity Banderas brings nothing new to the hard-boiled detective character.