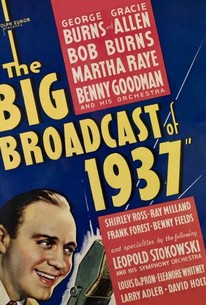 The Big Broadcast of 1937 Photos

The third film of Paramount's "Big Broadcast" series follows the pattern of the first two titles: negligible plot with plenty of memorable music and guest stars. Jack Carson (Jack Benny) owns the radio station this time out; he doesn't get along with the sponsors, and many are threatening to pull their advertising off the air. Jack's solution? Put on a big show, of course, with a handful of the biggest stars of the day. George Burns and Gracie Allen appear once again, this time as the hosts of a golfing program; musical guests include Benny Goodman and his Orchestra, Gene Krupa, Larry Adler, and Leopold Stokowski.

Benny Fields
as Himself

Benny Goodman Orchestra
as Themselves

Benny Goodman
as Himself

Leopold Stokowski
as Himself

Eleanore Whitney
as Herself

Larry Adler
as Himself

Critic Reviews for The Big Broadcast of 1937

It's as outdated as its lame vaudeville acts.

Fair Fields material, notable mostly for Hope and "Thanks for the Memory"

Audience Reviews for The Big Broadcast of 1937

This movie is too silly and not funny enough, but it does have its funny scenes here and there.

The Big Broadcast of 1937 Quotes