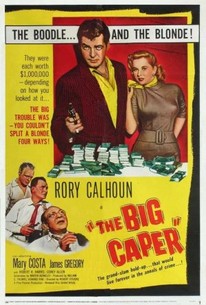 Obviously inspired by such films as The Asphalt Jungle and The Killing, The Big Caper takes place in a small town with a large bank. James Gregory plays the leader of a gang of thieves who intends to knock over the bank--but not without meticulous pre-planning. In the months prior to the holdup, gang members Rory Calhoun and Mary Costa (a popular opera star making her dramatic film debut) gain the confidence of the townspeople by posing as the husband-and-wife owners of a local gas station. When Gregory makes it clear that he plans to blow up a school to create a diversion, Calhoun and Costa decide to go straight in a hurry. The Big Caper was directed by Robert Stevens, best known for his work on such TV anthologies as Alfred Hitchcock Presents and The Twilight Zone.

Melody Gate
as Bitsy
View All

Critic Reviews for The Big Caper

There are no featured reviews for The Big Caper at this time.