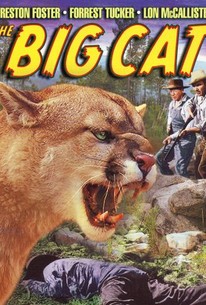 A frequent cable-TV attraction since lapsing into public domain in 1976, The Big Cat is an excellent outdoor drama, beautifully lensed in Technicolor (though most current prints are printed in a washed-out 2-color process). Set in Utah in the darkest days of the Depression, the film stars Lon McCallister as Danny, the citified nephew of rancher Gil Hawks (Forrest Tucker). Danny is pretty useless as a ranch hand, but he proves his mettle when Hawks' life is endangered by a marauding cougar. Preston S. Foster delivers the film's best performance as a hirsute, stingy backwoodsman who spends most of his time tracking down the "Big Cat." Former juvenile performers Peggy Ann Garner, Skip Homeier and Gene Reynolds also register well in comparatively mature roles. The no-nonsense direction is by Phil Karlson, later a favorite of the auteur theorists.

Gene Reynolds
as Wid
View All

Critic Reviews for The Big Cat

It's a routine but hearty outdoor adventure story that's set in the rural mountains of Utah, in 1933, in the midst of the Great Depression.

Audience Reviews for The Big Cat

It was alright - I want to know how they orchestrated the fight scenes between the cougar and the dog. That was the coolest part!