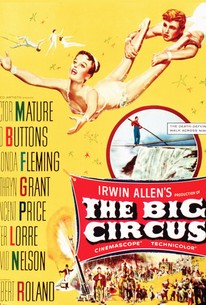 A disaster-plagued circus struggles to survive in this exciting drama. The owner desperately needs a loan, but before he can get one, a stern banker must inspect the place. Somehow the fellow ends up as a clown and flying around on a trapeze. Disasters such as a fire, an escaped wild animal, heavy storms, and other problems keep things exciting. Though not a major hit, it was well done and represents an early effort from noted producer Irwin Allen who also wrote the screenplay.

Critic Reviews for The Big Circus

Backstage at the circus, with colorful acts, a look at the business aspects of a circus, and a pioneering feminist heroine.

Audience Reviews for The Big Circus

Everything but the kitchen sink is thrown in to this colorful pageant about the struggle for a circus's survival . It's bright but empty however Peter Lorre playing a clown is genius casting.