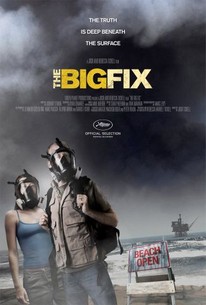 On April 22, 2010 the Deepwater Horizon offshore drilling rig run by BP sunk into the Gulf of Mexico creating the worst oil spill in history. Until the oil well was killed on September 19, 779,037,744 liters of crude oil and over 7,000,000 liters of chemical dispersant spread into the sea. By exposing the root causes of the spill filmmakers Josh and Rebecca Tickell uncover a vast network of corruption. The Big Fix is a damning indictment of a system of government led by a powerful and secretive oligarchy that puts the pursuit of profit over all other human and environmental needs. -- (C) Official Site

Peter Fonda
as Himself

Amy Smart
as Herself

Jason Mraz
as Himself

Critic Reviews for The Big Fix

If the film's conspiratorial viewpoint makes sense and is probably accurate, its final judgment is so gloomy that your impulse is to throw up your hands and despair.

Though the Tickells' unabashedly partial, first-person approach is a liability, they present so much damning evidence that their case is - one hopes - impossible to ignore.

More a summarizing project than an act of investigative journalism or a revelatory indictment.

Fix stretches into a mandatory-viewing critique of widespread government corruption...

By staking out only one side of the issue, The Big Fix inadvertently calls into question virtually every one of its contentions.

"The Big Fix" presents a compelling array of damning testimony from EPA officials, journalists, scientists and politicians as well as emotional scenes of distraught residents...

A convincing case is made that the government and the corporations it serves are worse than the mafia. A deeply radical film that makes you understand why young people risked pepper-spraying to build the Occupy Wall Street movement.

Audience Reviews for The Big Fix

There are no featured audience reviews yet. Click the link below to see what others say about The Big Fix!