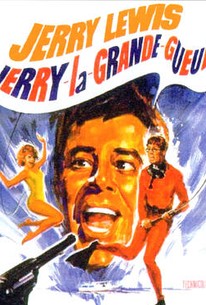 Jerry Lewis is aptly cast as The Big Mouth in this production (he also served as producer, director and cowriter). As bad luck would have it, Lewis is the exact double of a notorious gangster. The bad guys who think they've disposed of the gangster are taken aback when they see Jerry strolling about, while several other disreputable characters chase after Lewis in the mistaken assumption that our hero knows the whereabouts of a cache of stolen diamonds. Charlie Callas provides some good moments as a hit man who is so unnerved by Jerry's "resurrection" that he turns into a babbling idiot (so what else is new?) There's also a cute bit involving a Kabuki dance troupe. Overall, however, The Big Mouth suffers from the Curse of Jerry: too much repetition, too many pointless gags (will someone explain why Colonel Sanders makes a guest appearance?)

Harland Sanders
as himself
View All

Critic Reviews for The Big Mouth

So what's new? Nothing. Lewis has been in this rut for 10 years and he used to make good, funny movies but now he only marks time and does the easy stuff he knows by heart.

It's at least bearable.

Pretty funny at times if you love Lewis.

Audience Reviews for The Big Mouth

There are no featured audience reviews yet. Click the link below to see what others say about The Big Mouth!