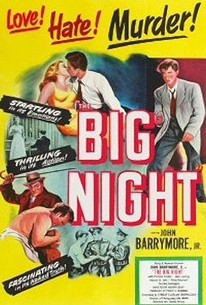 Nineteen-year-old John Barrymore Jr. made an impressive starring debut in The Big Night. Barrymore plays George La Main, a young man whose father, ex-boxer Andy La Main (Preston S. Foster), is inexplicably beaten up by sportswriter Al Judge (Howard St. John). Journeying farther and farther into the nether regions of his city's "night world," George tries to find out why his dad was roughed up. Along the way, he makes the acquaintance of a variety of "fringies," played by such able performers as Howard Chamberlain, Philip Bourneuf, Joan Lorring, and, in her last film, Dorothy (Citizen Kane) Comingore. The Big Night was co-adapted by director Joseph Losey and screenwriter Stanley Ellin from Ellin's "dark" novel Dreadful Summit.

Critic Reviews for The Big Night

Apparently everybody was concerned with theatrical effects and forgot all about a story with point and intelligence.

The Big Night is so slow, murkily lit, and incoherently involved with the meek pantomime of John Barrymore, Jr., that it might make more sense if the reels were run backward.

Neither juvenile delinquent drama or a wild youth thriller, this is a portrait in rage and shame and disappointment in fathers and father figures.

An hysterical melodrama posing as a film noir due to the dark underworld it inhabits.

There are no featured reviews for The Big Night at this time.