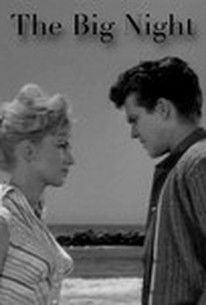 For those of you who might have wondered whether accordion virtuoso Dick Contino ever made a film, we refer you to The Big Night. Fourth-billed Contino weaves in and out of a plotline involving stolen money, an innocent married couple, and not-so-innocent gangsters. Newlyweds Randy Sparks and Venetia Stevenson find a sack of cash, then stash it away for a rainy day rather than inform the cops. That this is not a smart move is hammered home before the film is half over. You'll have to see The Big Night yourself to find out if Dick Contino gets the opportunity to render "Lady of Spain" on his squeeze-box. ~ Hal Erickson, Rovi

Critic Reviews for The Big Night

There are no critic reviews yet for The Big Night. Keep checking Rotten Tomatoes for updates!

Audience Reviews for The Big Night

I've counted 7 movies with this same title made from 1915 to 2009. This one made in 1960 had no real stars but that doesn't keep it from being a good addition to any film Noir collection. Made in 1960 it opens with a bank robbery at what appears to be late night as two teens are on a bridge kissing when a car being chased by police goes over the bridge and throws the money out the window into the water. The smart thinking teen figures out the loot is in the water and retrieves it, so starts a never ending twist and turns of holding a couple million dollars in a small sack. Some of the notable scenes are when police car stops and everyone gets out to shoot at bad guys, you see police car roll down hill no one set brake. What I like about theses movies is what you see in background, Sign for gas 25 cents a gallon. Also scene where guy buys another guy a beer throws 2 quarters on waiters tray and tells him to keep the change which means beer had to be 35 cents,. Also Brand names you see that are no longer with us. This is half the fun. Worth 4 stars in my book.