The Big Red One: The Reconstruction2005 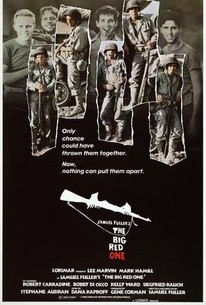 The Big Red One: The Reconstruction Photos

Iconoclastic film director Samuel Fuller spent decades nurturing his dream project, a movie about his experiences in the Army's First Infantry Division during World War II, but it wasn't until 1979 that he was able to finally bring the picture before the cameras. Unfortunately, Fuller was forced by his producers to work with a scaled-down budget, and he did not have final cut on the film; after his first rough cut ran nearly four-and-a-half hours, the studio took over editing on the project, and Fuller was vocally unhappy with the final results. In 2003, critic and film historian Richard Schickel initiated an effort to restore The Big Red One to a form that more closely resembled Fuller's original vision; using a large cache of newly discovered footage and the director's shooting script as a guide, the 113-minute theatrical version was expanded to 158 minutes, adding depth and detail to Fuller's sweeping and episodic tale of a hard-as-nails sergeant (Lee Marvin) and four inexperienced recruits under his command (Mark Hamill, Robert Carradine, Bobby Di Cicco, and Kelly Ward) as they battle their way across Africa to Europe between 1942 and 1945. Schickel's reconstruction received enthusiastic reviews when it went into limited release in the fall of 2004.

Critic Reviews for The Big Red One: The Reconstruction

The Big Red One is Sam Fuller on a grand scale, and the nearly three-hour-long "Reconstructed" version gives him ample space to indulge in his penchant for savage poetry, bizarre contradictions and cruel coincidences.

Audience Reviews for The Big Red One: The Reconstruction

This release gave Lee Marvin his best performance in years. As a grizzled sergeant leading a platoon of "wetnoses" into the dangers of battle, he's excellent. Based on writer-director Sam Fuller's personal reminiscenes of World War II. It's a terrific war movie as I watched it on DVD with the adding 49 minutes to the original 1980 theatrical release. The script is a feat as a story of the stead-fast progression of the soldiers from North Africa to Germany. In the cast, Robert Carradine is in a performance of insight, amusement, and is a crucial piece to the film. And Mark Hamill is a brilliant arc as sharpshotter, and in the "cremation" scene, he proves he is far more valuable and compelling an actor most would give him credit for.

The Big Red One: The Reconstruction Quotes