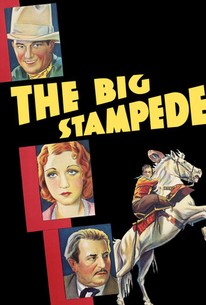 Thrifty Warner Bros. remade their old silent Ken Maynard Westerns as starring vehicles for John Wayne, dressing young Wayne up to match the stock footage of Maynard in action. The Big Stampede used plenty of footage from its 1927 predecessor, The Land Beyond the Law, and the inserts, filmed at a completely different location, are rather obvious. Wayne plays John Steele, a deputy sheriff sent by Governor Wallace (Berton Churchill) to protect settlers arriving in New Mexico Territory. Cattle baron Sam Crew (Noah Beery) and his henchman Arizona (Paul Hurst) aim to stop the settlers while Sonora Joe (Luis Alberni) and his Vaqueros arrive from Mexico to rob them. When old settler Cal Brett is murdered by Arizona, Steele deputizes Sonora and his men, and together they bring the killer to justice. The settlers, meanwhile, drive their herd to the nearby fort, and Crew decides to create a stampede. Steele saves Brett's niece Ginger (Mae Madison) from being killed by the stampeding cattle, but the nasty Crew is trampled to death, a victim of his own greed. A better-than-average B-Western, The Big Stampede benefits from colorful performances by Beery, Hurst, Alberni and Wayne's horse Duke. Freckled Sherwood Bailey, formerly Spuds in the Our Gang series, provides a few moments of comedy as Ginger's slingshot-crazy kid brother, and Madison, usually a tough dame in Warner's gangster dramas, makes an adequate love interest. Veteran Bad Guy Tom Bay, in his final film before being killed in a bar-room brawl in October of 1933, appears unbilled as an army messenger. Not the studio to let a good plot and usable stock footage go to waste, Warner Bros. filmed Marion Jackson's story a third time in 1937, as Land Beyond the Law, starring Dick Foran.

Critic Reviews for The Big Stampede

Does the trick of providing thrills.

There are no featured reviews for The Big Stampede at this time.