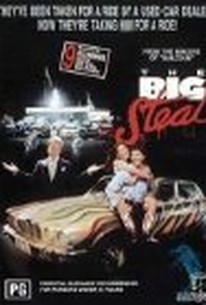 The husband and wife team of Nadia Tass and David Parker concocted this charming teen comedy concerning a disappointing birthday present. Ben Mendelsohn plays Danny Clark, a shy 18-year old who only wants two things out of life: to go out with Joanna (Claudia Karvan) and to own a sleek new Jaguar. When Danny's father Desmond (Marshall Napier) comes through with a birthday gift for Danny, it's a car but it's not what Danny had hoped for --it is the family's old 1963 Nissan Cedric. Disappointed, Danny decides to trade the car in for a 1973 Jaguar before he goes out on his first date. Danny makes a deal with sleazy car dealer Gordon Farkes (Steve Bisley) for the 1973 Jaguar -- but Farkes switches engines on poor Danny. While Farkes is having a good time at a sex club, Danny decides to retaliate by gathering together a few of his friends to help him steal the engine from Farkes' Jaguar. ~ Paul Brenner, Rovi

Critic Reviews for The Big Steal

There are no critic reviews yet for The Big Steal. Keep checking Rotten Tomatoes for updates!

Audience Reviews for The Big Steal

There are no featured audience reviews yet. Click the link below to see what others say about The Big Steal!