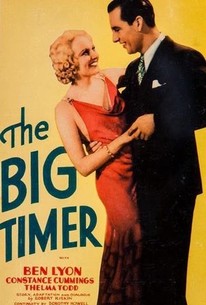 Ben Lyon plays an aspiring boxer in this pre-code drama. Cookie Bradford (Lyon) toils at a diner and works out at the gym while waiting for his big break. His one supporter is the gym owner's daughter, Honey (Constance Cummings). When her father dies suddenly, she decides to take over his business. The fighters, however, have no faith in a woman, and they all walk out on her -- except for Bradford. She begins coaching him and he starts winning fights. But when they marry and head for the big city, male prejudice towards Honey works against them until she manages to place Bradford in a charity fight held by a socialite (Thelma Todd, on loan from the Hal Roach Studios). Bradford then fights his way up to Madison Square Garden, but it all goes to his head. He ignores Honey in favor of the socialite, and dumps her as a manager in favor of Dan Wilson, a man with a big name and big promises. But Bradford's luck runs out and he loses his way to the bottom of the bill. It takes Honey's ingenuity to make him into a contender once again. This was Edward N. Buzzell's debut as a feature film director.

Bert Starkey
as Smitty
View All

Critic Reviews for The Big Timer

There are no critic reviews yet for The Big Timer. Keep checking Rotten Tomatoes for updates!

There are no featured reviews for The Big Timer at this time.