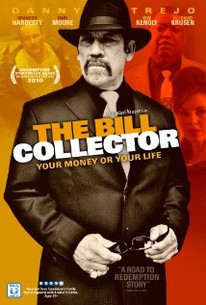 A prominent bill collector finds himself indebted to a very dangerous man, and scrambles to raise the funds needed to save his life in this independent drama featuring Danny Trejo. Lorenzo Adams (Gary Moore) works for Lump Sum Collections. A top agent for the company, he never returns to the office empty handed. Meanwhile, Lorenzo owes has been skipping on his own debt to fierce Uncle Frankie (Trejo) for years. When Uncle Frankie learns that Lorenzo has been hiding out in Norfolk, West Virginia, he reckons that the time has come to collect from the collector. But Lorenzo is flat broke. Now, with no place to run and Uncle Frankie losing patience, Lorenzo turns to Pastor Kevin (Ron Kenoly) and the down-trodden members of an inner-city parish to pay off his lingering debt while he still can. ~ Jason Buchanan, Rovi

Tamara Johnson
as Therese
View All

Critic Reviews for The Bill Collector

There are no critic reviews yet for The Bill Collector. Keep checking Rotten Tomatoes for updates!

Audience Reviews for The Bill Collector

There are no featured audience reviews yet. Click the link below to see what others say about The Bill Collector!