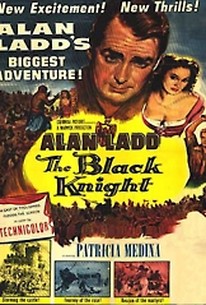 Alan Ladd once more journeyed to England to make a film for Columbia's British counterpart (Warwick Studios), and the result was the lively swashbuckler The Black Knight. Ladd plays John, a young swordmaker who aspires to join the Knights of the Round Table. Unfortunately, he is falsely accused of cowardice and banished from his community. Thanks to the secret tutelage of one of Arthur's knights, John is able to train himself in the art of combat, and soon reemerges as the vengeance-seeking Black Knight. In this guise, he is able to bring a group of traitors to justice, rout a band of invading Saracens, and rescue his lady love Linet (Patricia Medina) from certain doom. Anthony Bushell, who was soon to completely forsake acting in favor of producing and directing, costars as King Arthur, while the villains of the piece are essayed by Peter Cushing and future Dr. Who Patrick Troughton. ~ Hal Erickson, Rovi

Harry Andrews
as Earl Of Yeonil

Ronald Adam
as The Abbot

Thomas Moore
as The Apprentice

John Kelly
as The Woodchopper

Critic Reviews for The Black Knight

There are no critic reviews yet for The Black Knight. Keep checking Rotten Tomatoes for updates!

Audience Reviews for The Black Knight

There are no featured audience reviews yet. Click the link below to see what others say about The Black Knight!