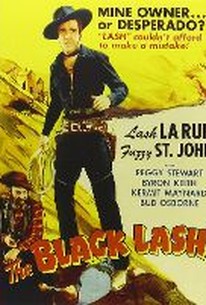 Not so much produced as stitched together, The Black Lash was ostensibly a sequel to Frontier Revenge (1948). Duce Rago (Ray Bennett), whom Marshal LaRue (Al "Lash" La Rue) had shipped off to prison in the earlier adventure, is back, but his stagecoach and train robberies leave a bit to be desired due to the stupidity of the hired help. Lawyer Bill Leonard (Byron Keith) suggests that they get some "heavy artillery," meaning good old Lash, who apparently was so disgusted with Rago only receiving a slap on the wrist for his previous crimes that he abandoned law enforcement for good. Naturally, our black clad hero is working undercover with Cattlemen's Association agent Lem Woodruff (Kermit Maynard), and this time he manages to send Duce up the river for rather more than six months.

Larry Barton
as Judge
View All

Critic Reviews for The Black Lash

It should appeal to the fans of the star, Lash LaRue.

There are no featured reviews for The Black Lash at this time.